A balcony on the Lauragais, oppidum, hikes, hang gliders... visitors of all age will fall under its charms!

More than a mountain

Squeezed between the valleys of the Sor and the Orival, Berniquaut dominates the plain of the Lauragais from an altitude of 568 metres. Its unusual profile makes it easy to spot, and its southern slope drops away steeply. From its summit, you can see the lake at Saint-Ferréol, Sorèze and the Lauragais.

From its top you will appreciate the strategic importance of the site which has been used by man since prehistoric times, often as a place of habitation. Archaeologists have found traces of human occupation dating from the Upper Palaeolithic era, traces of a Gallo-Roman and a medieval oppidum.

Several walking routes pass over the mountain, and lovers of outdoor activities will find plenty to appreciate. Walkers will be challenged by the steep slopes, mountain bikers will enjoy the rough terrain, hang glider pilots will profit from the breeze, climbers will enjoy the cliffs. Don't miss the small caves!

Here, men have left traces of their passage from 30,000 years ago. They occupied natural cavities on the south side of the mountain. In Neolithic times, farmers settled on the mountain and grew crops and kept livestock.

When the Gauls occupied the site, they raised an earth wall 710 metres long to turn it into a hillfort. As well as engaging in agriculture, the inhabitants took control of commerce in the surrounding area.

During the Pax Romana, most people moved down onto the plain, only to return to the high ground when the barbarian invasions began. Called Verdunum, this fort was used during the Merovingian and Carolingian periods. It was abandoned for good in the 13th century.

Starting in the 1970s, archaeologists excavated remains from all these periods. Today, if you are adventurous enough to come up here, you can see the foundations of the medieval village, enjoy a superb view of the region, and explore the famous grottos of the Berniquaut. 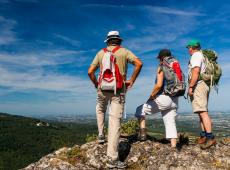 Where history and nature meet

It is not so difficult to climb to the top of the Berniquaut. As well as the view, you will discover the history of this exceptional site.

A curiosity of nature, or a megalithic relic?

A short way along the ridge from Berniquaut you fill find this unusual slap of rock whose surface is pockmarked by eighty-six small hollows. Even today, no one can explain what they mean.

Saint-Jammes clearing Saint-Jammes shelters the remains of a pre-Romanesque chapel in the shade of a massive beech tree that is more than 450 years old. Its branches shade an area 90 metres in circumference.