A town with the colour of time

Sorèze is a charming town with a rich heritage centred around its Abbey-School.

Following the foundation of the Benedictine abbey in 754, Sorèze grew up around the religious establishment, largely at the expense of the fortified village of Berniquaut, located high on the hill behind the town. Documents from the abbey’s archives confirm that Sorèze already existed in the 11th century.

The hazards of history have left their mark on the town. The abbey was destroyed several times during the Middle Ages and the Wars of Religion, and today it is not unusual to find old architectural features, such as capitals or modillions, which were reused in the façades of subsequent buildings. The abbey itself was rebuilt too, and it became a school in 1685.

The abbey was founded in marshland which the monks drained. The water was diverted into channels and fountains, and this abundance of water helped the town to become a centre of cloth and leather making. Sorèze took its name a stream, the Soricinus.

From the Middle Ages to the 20th century

A few of the older houses in Sorèze date from the Middle Ages, and you will find them in the older part of town. Homes built by the well-to-do boast half-timbered and corbelled façades. These lightweight buildings were well-adapted to the marshy ground, and they used wood from the Montagne Noire and small bricks. Look out for the relieving crosses in the shape of St Andrew’s Cross.

The centre of the village is graced by another survivor from the Middle Ages. The bell tower of Saint-Martin is all that remains of the old parish church built in the 15th century. Only the choir was vaulted in the flamboyant gothic style, and the capitals carved in high relief are a perfect example of this type of architecture.

The Benedictine abbey was rebuilt in the 17th century following the Wars of Religion. The ensuing success of the school led to numerous enlargements of the buildings in the neoclassical style. Look out for the exceptional façades of the Abbey-School on the Rue Saint-Martin, and the ceremonial courtyard in the Rue Lacordaire. The buildings cover a total of 25,000 sqm and a 6ha park.

Whatever happened to the laundry? The construction of the parish church deprived the town of its public laundry building. A new one was built on the edge of the village at the start of the 20th century on the bank of the Orival stream. It was modern for its day with wash benches set at waist height. The washerwomen could and gossip without suffering from bad backs!

Climb up the bell tower of Saint-Martin and enjoy an unrivalled panoramic view of Sorèze and the Abbey-School, the Montagne Noire and the Lauragais. 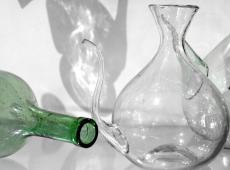 From the Glass Museum to the Abbey-School Museums

The art of glass, the history of the school and the works of Dom Robert await you! 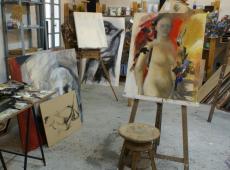 A village of artists and craftsmen

Sorèze is brimming with art galleries and studios belonging to painters and sculptors. It is also home to a stained-glass maker, a cabinetmaker, a bookshop and an antiques shop. 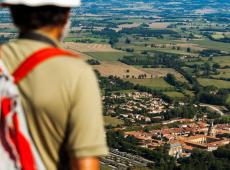 NAture within a reach!

Our hikes - in French 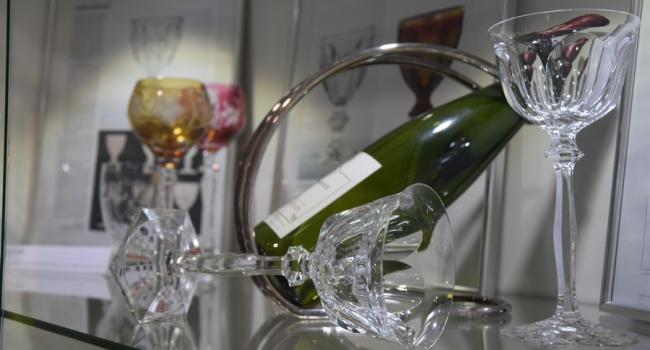 Located in the former hospice, this museum contains around 2,600 works of ancient glass, some of them for everyday use, others more decorative. Each year the museum hosts a temporary exhibition dedicated to glass.

This extraordinary building is home to two museums. The Abbey-School museum will immerse you in the history of this establishment which was once a royal military school and a seminary, and most recently attracted students from around the world, some of whom became famous.

The Museum of Dom Robert and 20th century tapestry is devoted to the work of one man: Dom Robert. The galleries are bathed in natural light and, you will discover the process of creating a tapestry from the first sketches to the finished work.

A town with a colourful past

You can discover the physical reminders of the history of Sorèze by following a self-guided walking route (Sorèze TIC) complete with information boards at various key points of interest. Let yourself be charmed by the unusual character of this charming little town.

A school and a park

The school was opened in 1685 and closed its doors for good in 1991. In between those two dates, it was a seminary, a school with an avant-garde curriculum that included modern languages, a royal military school and a private school that welcomed pupils from around the world. Since September 2017, a part of the building has become a training centre that offers apprenticeships to would-be craftsmen.

The abbey is set in a walled garden of six hectares (fifteen acres). During the numerous cultural events which take place here, you can discover the former swimming pool used by the students, their gymnastic apparatus and a statue of Louis XVI with his head still attached…all this in the shade of majestic old trees.

Sorèze is located at the foot of the Montagne Noire. If you follow the hiking paths up through the forest. You can enjoy magnificent views of the plain from viewpoints such as the Berniquaut or the Causse.

Our hikes - in French

Jean Mistler (1897 – 1988) was a politician and writer born in Sorèze. He was elected deputy for the department of the Aude and served as a government minister several times. Elected to the Académie Française, his work ‘The End of the World’ written in 1964 recounts his childhood in Sorèze.

This is a town of great men! Go and see the rolls of honour which record the names of former students of the school. Many are famous in France.

Elisa Lemonier (1805-1865) was born in Sorèze in the Rue de la République. She was shocked by the lack of knowledge among female workers and the poverty of women without qualifications. In 1862, she founded the first French professional school for women.

Father Lacordaire (1802-1861) restored the Dominican order in the 19th century. He became director of the school and devoted his whole life to making it a renowned establishment. Admire his sculpture in the ceremonial courtyard, carved in white marble by François Girardet.

Georges Artemoff (1892-1965) was an artist and a sculptor. He immersed himself in the artistic scene of Montparnasse in the 1920s and produced works in the expressionist style with a focus on mythology and wildlife. He lived in Sorèze and Revel until the end of his life.