This medieval village perched on a hill in the Lauragais offers the visitor an outstanding view of the Pyrenees and Montagne Noire, and a fascinating history.

A bastide or Castelnau

It all began with the Romans

Saint-Félix-Lauragais was born when the Romans established a small camp on the knoll called the hill of the three windmills. The main Roman colony was in Saint-Julia. The population grew, and the camp became a Visigoth castrum. Archaeologists have discovered tombs, bronze belt buckles and lachrymatory vessels.

Around the 10th century, the territory was claimed by a lord who built a château on the high ground opposite the three windmills. This well-protected domain belonged to Guillaume Jourdain (1035). The medieval château was destroyed by Simon de Montfort during the Albigensian Crusade. The château we see today was reborn from the ashes, and a new village was created besides its walls.

The birth of a hybrid

Is Saint-Félix a bastide or a castelnau? In fact, it is a bit of both. It was laid out in the style of a bastide (a central square with a market hall and bell tower, streets in a grid pattern, ramparts…) and it was governed by its council, but the ultimate power for all decisions lay in the hands of its lord, and he lived in the château on the edge of town! Strictly speaking, this makes Saint-Félix a fortified village rather than a bastide.

A village with divine protection

You don’t need to worry about your safety when you are in Saint-Félix because four saints watch over the village! The first is Saint-Félix, who gave the place its name. Of north African origin, he became Bishop of Girona and was martyred in 304. Some of his remains allegedly reside in the church at Saint-Félix.

In 1390, a terrible storm hit the Lauragais and the population sought shelter in the Collegiate church which had been consecrated by the pope in 1318. After waiting several days for the storm to abate, one of the villagers decided to brave the atrocious weather. He struggled out onto the steps of the church carrying the stature of Notre-Dame la Belle…and the storm stopped instantly. The Virgin became the second protector of Saint-Félix.

Now for the third divine intervention. During the Wars of Religion, the Protestants fired more than 120 cannon balls at the ramparts of Saint-Félix without a single one of them hitting its target! This event took place on 14 February 1570, and Saint Valentine became the third protector of the village.

So why not have one more saint for good luck? In 1862 the population was decimated by an outbreak of cholera. The inhabitants decided to offer up a stone statue of the Virgin Mary, hoping that she would protect them. The stature was mounted on top of the bell tower in the heart of the village with a plaque at its base inscribed in Latin with the words, ‘I am the guardian of your citadel’.

The finest treasure of Saint-Félix is free to visit at any time of day! Bring your camera, or simply your eyes, and admire the 360o panorama from the orientation table on the ramparts. 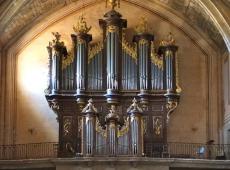 The soothing sound of an organ

The collegiate church and its 18th century organ

A jump into the past?

If you visit the birthplace of this composer, you will be taken right back to the start of the 20th century! 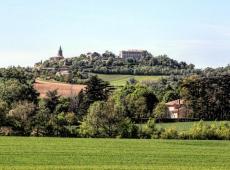 After a pretty walk in the hills around Saint-Félix, why not reward yourself with a delicious pastry from the bakery! 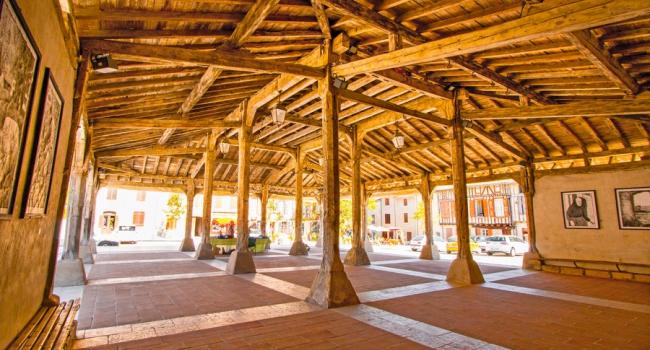 Saint-Félix and its famous sons

Why is the central square named after Guillaume de Nogaret? Because he was born on estates owned by the lord of the village. A great lawyer and the right-hand man of the French king Philippe IV, he had a reputation for violence. As well as being behind the attempt to kill Pope Boniface VIII at Anagni, Guillaume de Nogaret was instrumental in bringing charges of heresy against the Knights Templar.

You may find your eyes being drawn towards one of the larger houses overlooking the main square. Can you hear that sweet music coming from inside? This is the birthplace of one of the great composers of the romantic period, and the descendants of Déodat de Séverac still live there today. Déodat began his musical training as a little boy with the organist of the Collegiate church just down the street. He continued his schooling in Sorèze and studied law in Toulouse. Next, he spent ten years at the Schola Cantorum in Paris. He met regularly with other artists in Montmartre’s Bateau-Lavoir and began to make a name for himself as a composer, but he grew homesick and decided to return to south-west France.

The Cathar Council: truth or legend?

Catharism was a religious movement with its roots in Christianity that spread rapidly across south-west France in the 11th century. It promoted the idea of returning to a simpler form of Christianity as a reaction against the ostentatious opulence of the Catholic church. The Cathars – bons hommes and parfaits – preached the word of God with humble simplicity.

The movement grew so large that it needed a hierarchy, and that is why the Eastern Orthodox Pope Niquintas of Constantinople came to the Languedoc to hold a great council in the château at Saint-Félix. But historians have been unable to find any firm contemporary evidence that this council took place...is it simply a legend?

The organ of Saint-Félix: one note after another

The church organ was made in 1780-81, and it was classified as a Historic Monument in 1967. At the time of its first restoration in 1930, keyboards were added and this meant that Déodat de Séverac could use it to play his romantic compositions.La construction de l’orgue remonte aux années 1780-81.

In 1989, a restorer from the Historic Monuments organisation happened to be passing through Saint-Félix and he was particularly delighted to see this magnificent 18th century organ. Whereas most organs from that period had been modernised and mechanised for the sake of convenience, the restorer found that the one in Saint-Félix still had its bellows glued together from rabbit skins. But then he noticed the organ had been modified after all – notes had been added! Following his report, it was decided to take them away, and the organ underwent a second restoration in 1990-92. What it lost in romance it regained in authenticity.